The Scottish Barn is a treasure and ranks among the earliest and most unique barns in America.

Predating the use of sawmills, every structural timber in the Scottish Barn was either hand hewn or hand split. Besides its early age, the Scottish Barn is remarkable because of its extraordinary frame. Its massive beams are interlocked in a manner that is so complex, its method of construction has been described as “secret joinery”. The “secret joinery” involves the union of three beams (a post, tie and plate beam). Tie beams are timbers that span the width of the barn and are seated on top of posts, and plate beams are the elongated, horizontal timbers on which the roof rafters rest. 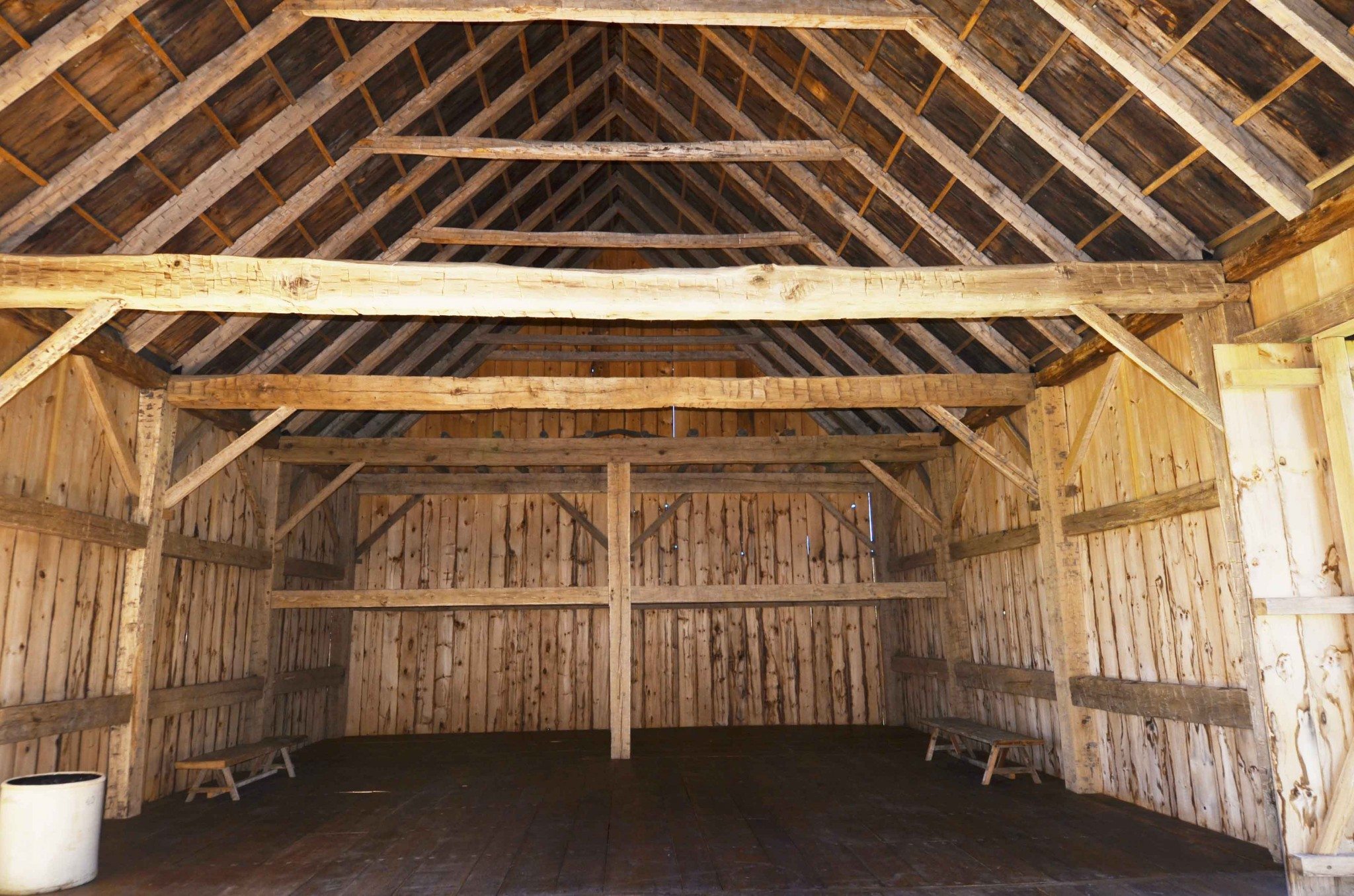 In the Scottish Barn, the posts are tapered, with their tops wider than their bases (the tops of the posts measure approximately 19 inches and slim down to about 9 inches at their bases). The tie and plate beams are seated on the wide posts, and all three beams are joined together in an ingenious arrangement of mortise holes and tenons.

The Scottish Barn’s enormous timbers are pinned together 14 feet off the ground. Raising each beam was a feat. Remarkable engineering skills were requisite for the early builder who worked without benefit of modern machinery.

Dating to the 18th century, the Scottish Barn measures 30 feet by 60 feet. Like many other early barns, it was built almost entirely with white oak beams. Its steep roof harks back to a time when thatch was used for roof materials.

The Scottish Barn has a central bay designed for threshing grain. Each long side of the barn is equipped with wide, rotating doors for wagons to enter and exit the thrashing bay. The largest area of the barn was dedicated to hay storage, while a smaller area housed milk cows.

The “secret joinery” of the Scottish Barn originated abroad. It has been conjectured that its cultural origins can be traced to Scotland. This remains unconfirmed, as there is insufficient research relating to which style of timber framing derived from which country. 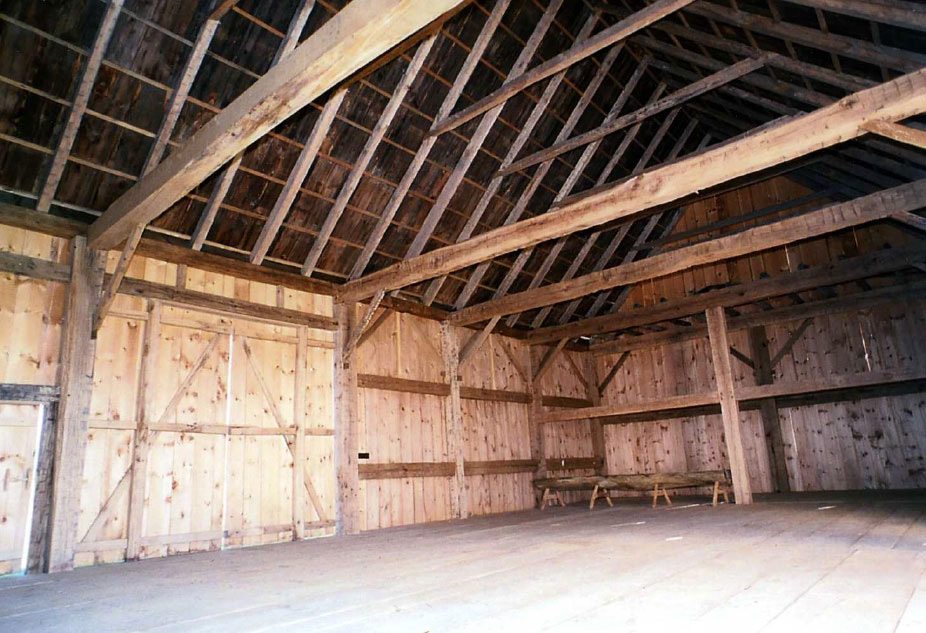 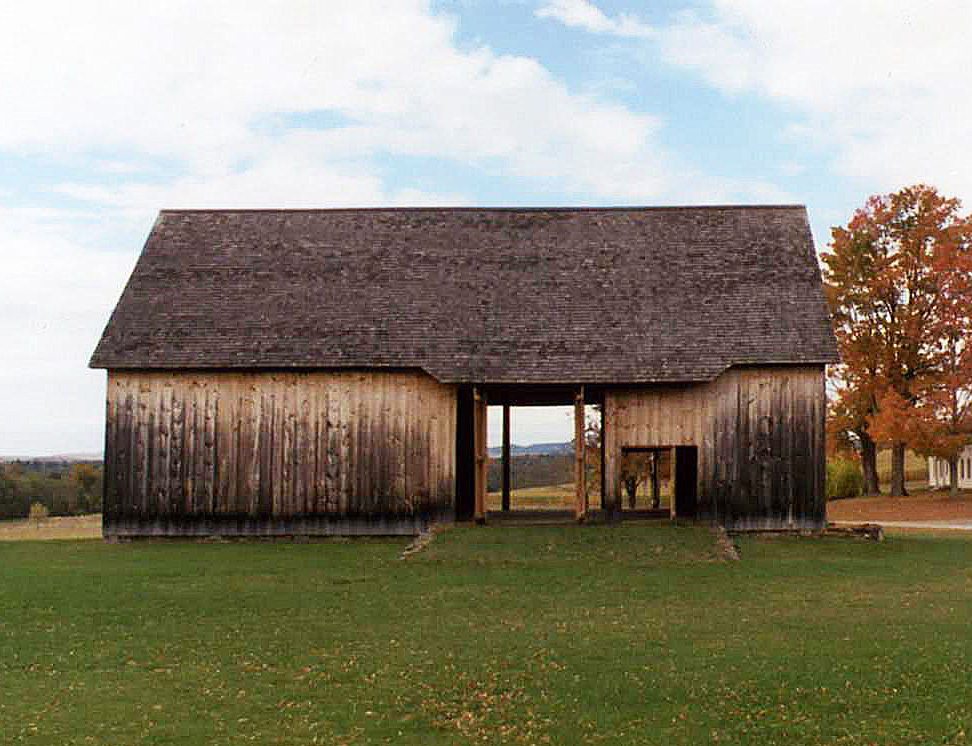 From the outside, before it was restored, the Scottish Barn looked old and deflated in 2000. Its foundation was crumbling, doors were missing, and its weathered siding was warped. There appeared to be nothing remarkable about the Scottish Barn.

However, in stark contrast to its undistinguished exterior, the interior of the Scottish Barn was astonishing. The beauty of its joinery was unmistakable, further enhanced by the gorgeous patina of its massive beams.

Although there had been alterations in the structure since it was first built in the mid to late 1700s, the exceptional nature of its original frame was intact and easy to identify.

Every original post but one was in place, as well as its tie beams (the huge beams traversing the barn).

Sitting uncomfortably on remnants of sill beams and a deteriorating concrete foundation, the Scottish Barn’s extraordinary frame was clearly its saving grace.

The most significant change in the barn was the construction of a new roof system, one with a more modest pitch. Although all the rafters had been replaced, the plate beams remained original. Plate beams are the horizontal timbers that support the roof system. Both plate beams in the Scottish Barn were 60 feet long without any splices!

The Scottish Barn appears to have been moved to its present site at an early date. It is likely that the alterations in the roof pitch and framing were done at this time. Given the heft of the timbers, it can be surmised that it was not moved very far from its original location.

The complexity of the Scottish Barn joinery was such that the builders who moved the barn appeared to have been stumped as to how to disassemble it. Unfortunately, they sawed off the tenons of the tie beams, and added replacement tenons when it was rebuilt.

But they were careful to re-insert the small wedges that secured the braces, a unique feature of the Scottish Barn. Rectangular wedges were used to hold braces in place. Braces are the short beams set at angles that connect horizontal and vertical beams.

Wide plank floor boards covered the thrashing bay, while the large area dedicated to hay storage had no flooring. Mortise holes in two horizontal beams revealed the existence of six stanchions. Cows were brought in and out of the barn through two gable end doors. 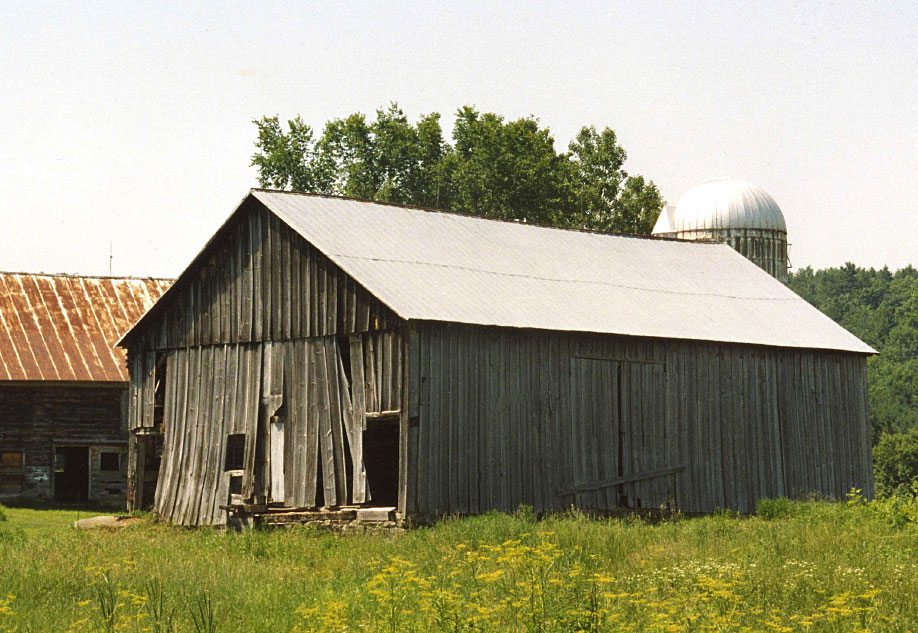 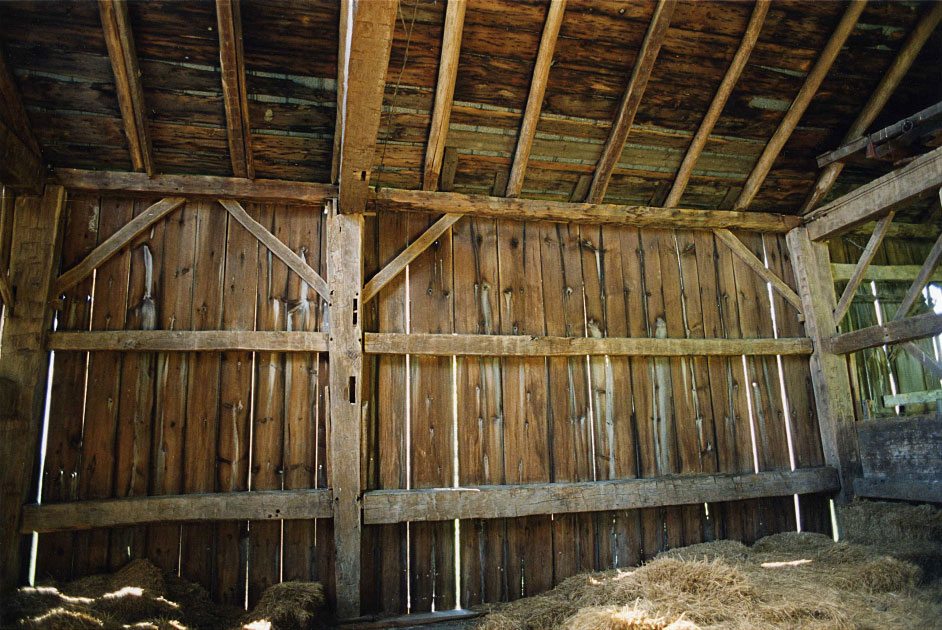 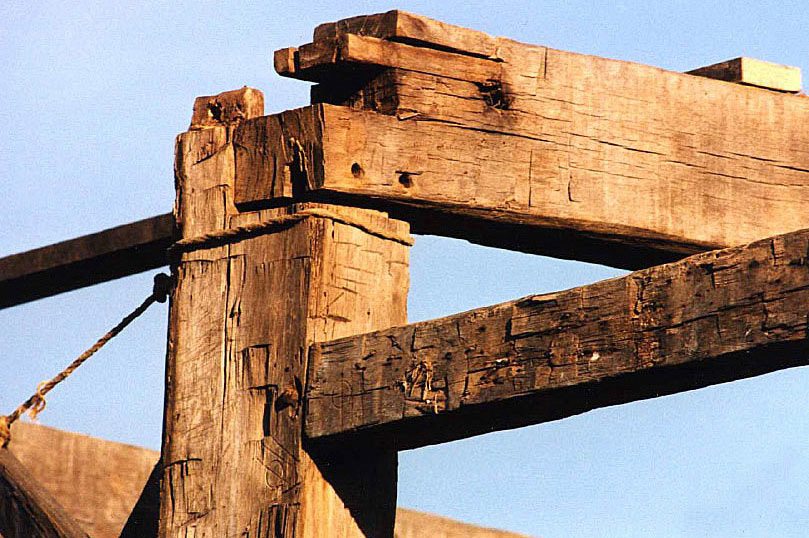 Authenticity was the guiding principle in the restoration of the Scottish Barn. The goal was to bring the barn back to its earliest design, to the extent possible. This proved to be a challenge.

Assessing the Scottish Barn’s structural problems and developing a strategy for repairing it resembled a mystery novel more than a construction plan.

From the start, the Scottish Barn was full of surprises. Throughout its dismantling, and well into the final phases of restoration, the Scottish Barn offered new revelations about its original structure and former uses. Accordingly, strategies for its restoration fluctuated, as new information was gleaned.

Timber framer Ron Babcock undertook the daunting task of rejuvenating the historic Scottish Barn. Over the course of six years (with several interruptions), the Scottish Barn was disassembled, restored and resurrected, with an amalgam of skill, muscle, audacity, and ingenuity.

One of the most difficult obstacles to surmount was devising a way to taper new posts to replace rotted ones. After some trial and error, a solution was found. White oak timbers were harvested locally and cut at an angle on a saw mill.

The new tie beams and posts were custom fitted to join with the existing beams, replicating the Scottish Barn’s “secret joinery”.

The complicated joinery of the Scottish Barn includes posts that have two tenons set at right angles to each other, one stepped up several inches from the other. Its tie beams are framed with a tenon and mortise hole on each end. The tenon fits into the plate beam, and the mortise hole receives a tenon from a post. The Scottish Barn’s plate beams have two mortise holes at each joint, one for a post’s tenon and the other for the tenon of a tie beam.

A particularly significant discovery was revealed when the plate beams were dismantled. Their framing indicated that the original roof system of the Scottish Barn had been extremely steep. This led to the supposition that the Scottish Barn’s first roof covering may well have been thatch.

Accordingly, all new rafters were cut, hewn and framed to a 12/12 pitch. Thatch poles were added as well, and collar ties, to stabilize pairs of rafters. The prohibitive cost of installing a thatch roof led to the alternative choice of installing cedar shingles (an appropriate roof covering for a slightly later period).

A dry laid stone foundation wall was erected by mason Clayton Babcock, and large oak sills were seated on its walls. The floor system was then covered with new plank floor boards, ranging from ten to twenty eight inches wide. These planks were secured with wooden pegs that were chiseled and splayed, a process involving multiple labor-intensive steps.

The unique doors of the Scottish Barn, which swivel on posts, were inspired by evidence found in the Scottish Barn’s door headers. Three swivel doors on each of its long sides have been reconstructed (one pair of large double doors and a single entry door). The unusual design of these doors, known as Haar-hung doors, pre-dates the use of iron strap hinges. The doors are balanced on a rotating wooden post, secured with round wooden pins.

Two crow’s nests were built on top of the loft on the east side of the barn. These landings are the only significant feature included in the restoration of the Scottish Barn that does not relate to its original structure. The sole purpose of the crow’s nests was to offer a stupendous view of the barn’s magnificent structure. 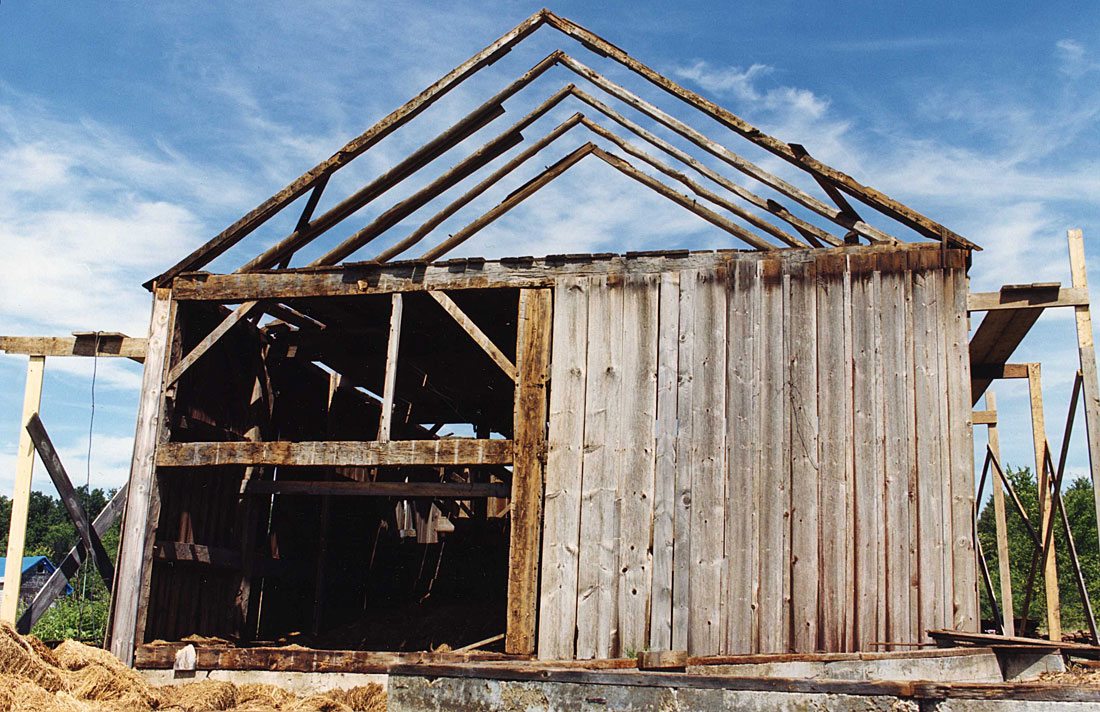 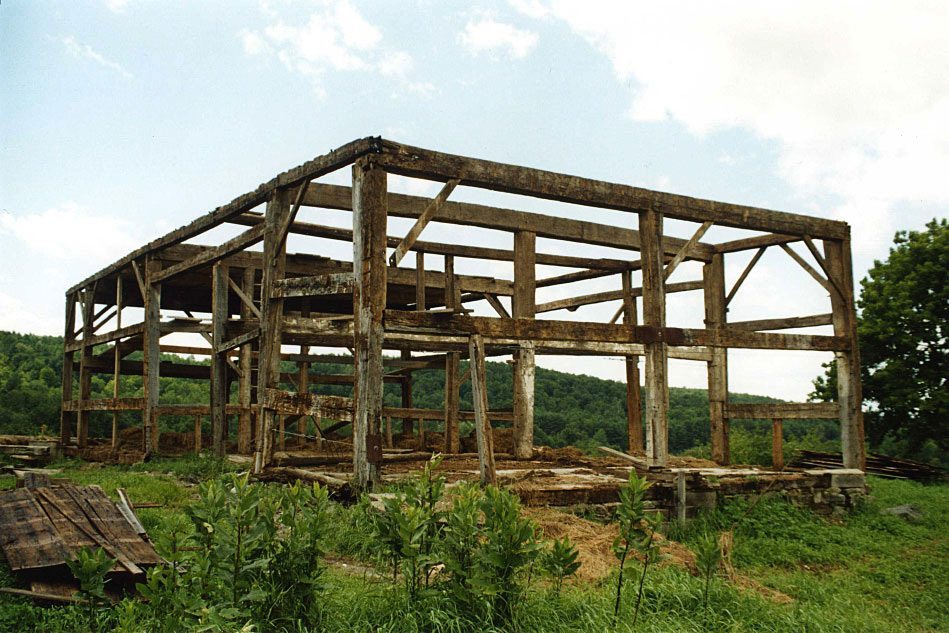 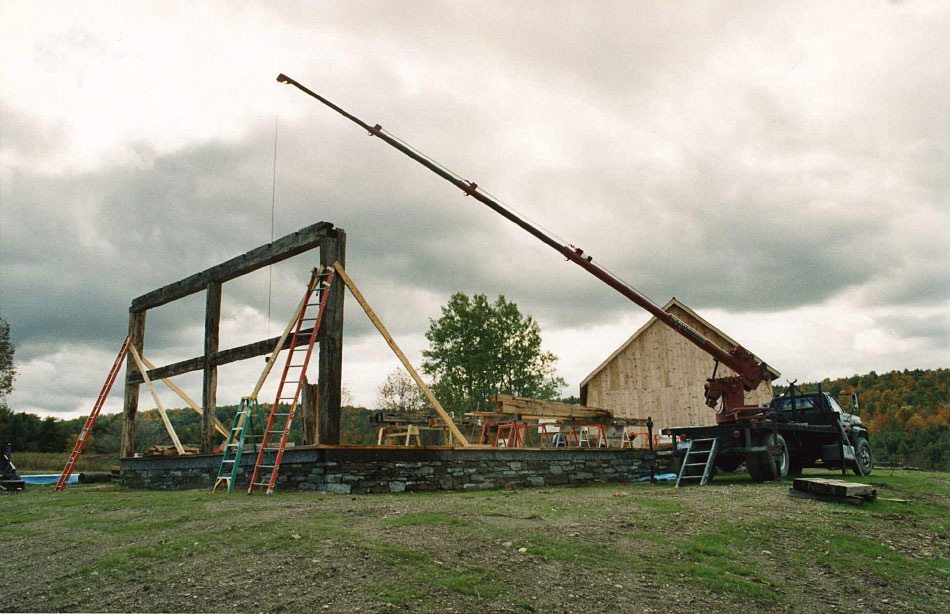 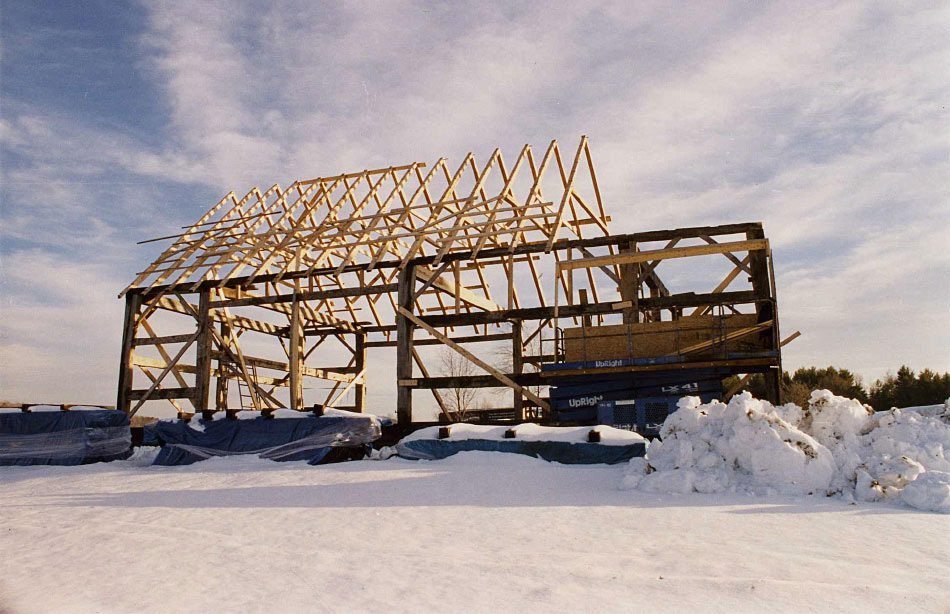 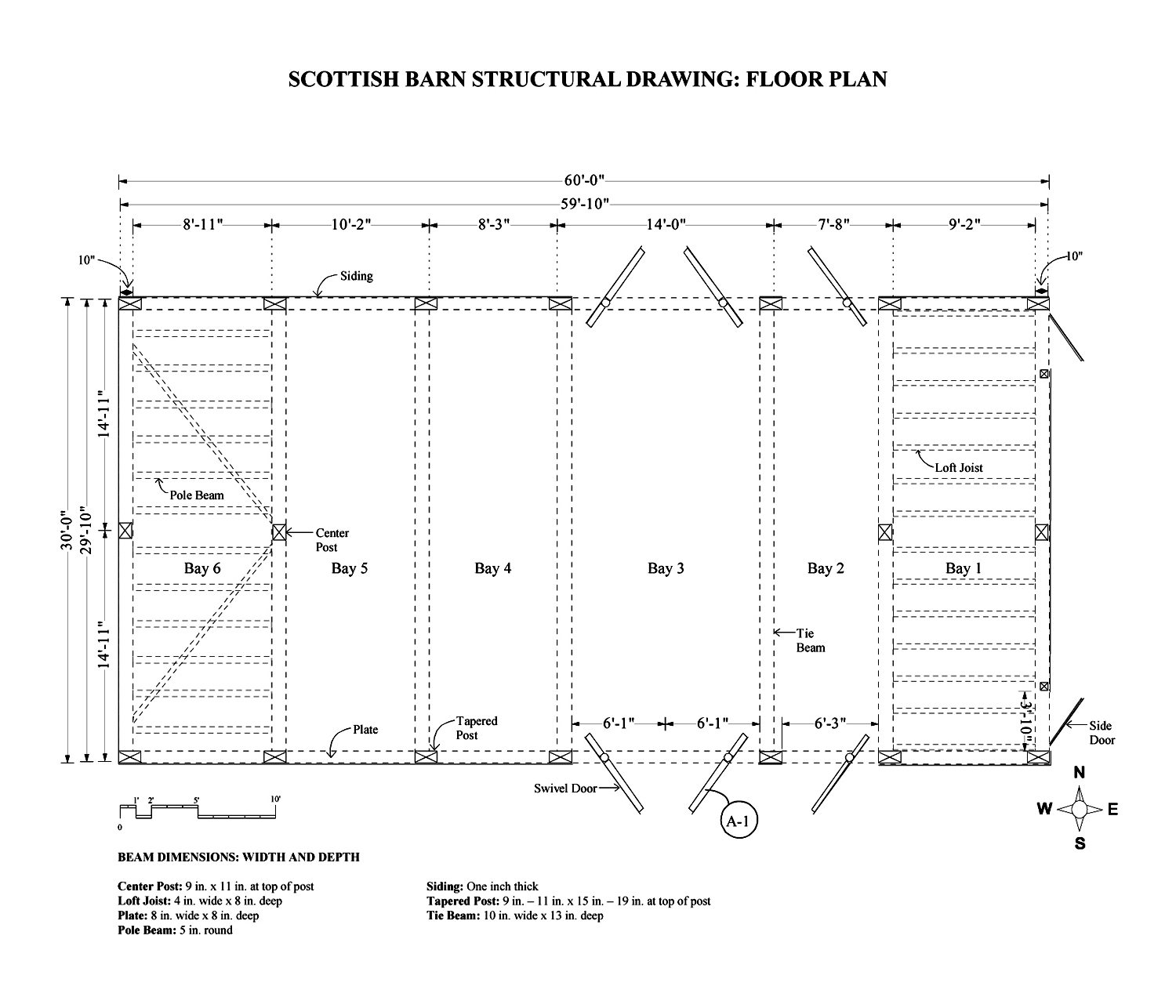