The Corn Crib is a stellar example of an early 19th century timber framed structure designed for corn and oats.

Brimming with partitions and joinery, the Corn Crib can boast more mortise and tenon connections per square foot than barns twice its size.

Form and function are ingeniously combined in the design of the Corn Crib. Slanted side walls are the Corn Crib’s most distinctive feature. The taper, which narrows a foot from top to bottom, was designed to keep the corn dry. Two elongated, narrow rooms are framed with partition walls on both sides of the Corn Crib. The corn crib partitions, which are set about three feet from the outside walls, consist of interior plate beams, studs and siding boards. 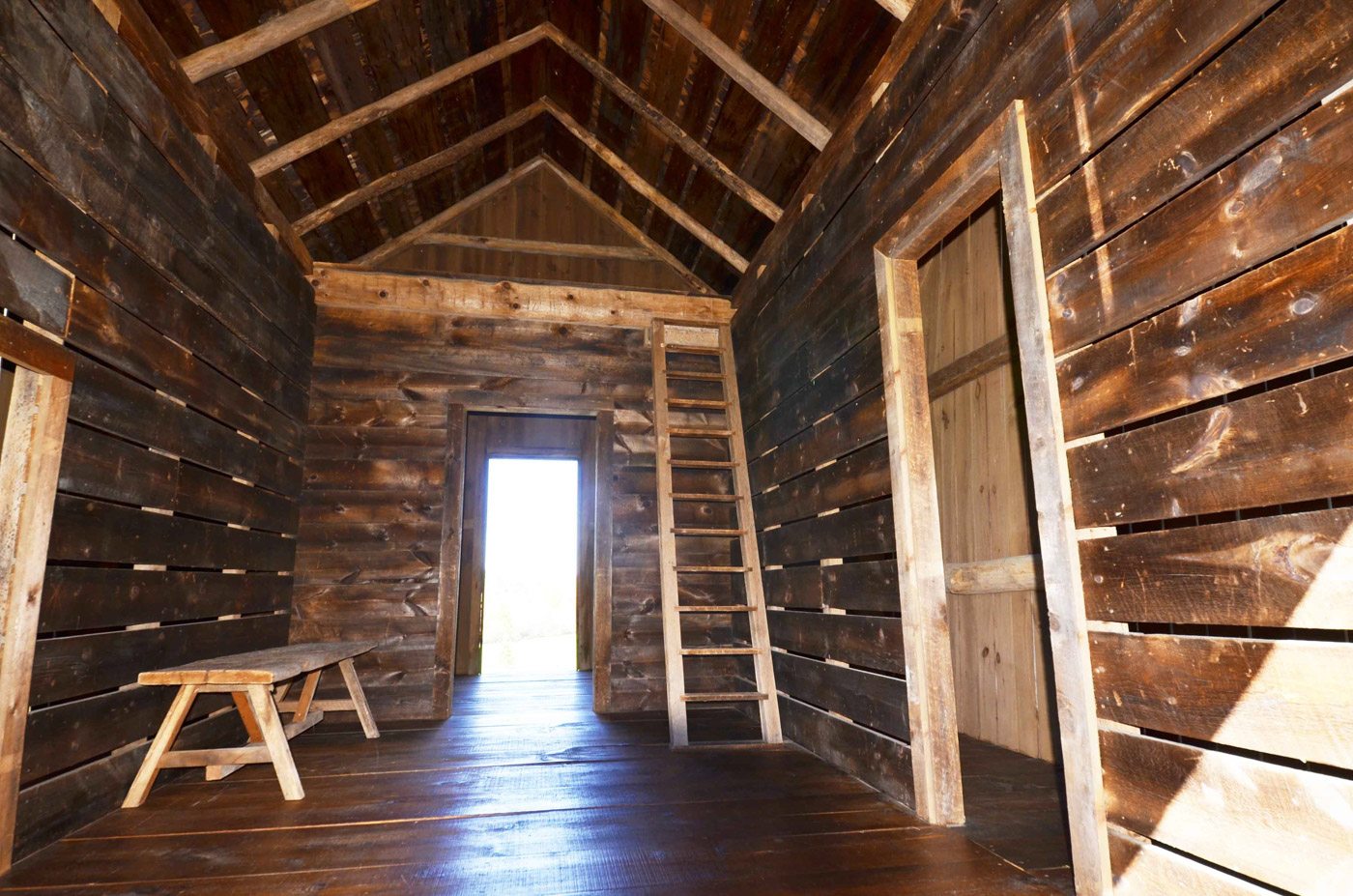 The Corn Crib’s rooms are enclosed with boards spaced slightly apart. This provides air circulation for the corn cobs, which are susceptible to rot. An unintended consequence of the spaced boards is the delightful, and often dazzling, play of light inside the Corn Crib.

The Corn Crib’s other rooms include storage space for grain in the back bay, with a loft situated on top of it. A front entry room is flanked by the corn crib partitions. It served as a work space for shelling corn and mixing the feed for livestock.

Vermin played an important role in the design of early corn cribs. To deter rats, weasels and other animals from accessing the barn, the Corn Crib was raised above ground on stone piers strategically placed to support its frame.

The Corn Crib, which is typical of other corn cribs found in the West Hoosick area, was built on the Hadley Farm, located just a few miles from the Nipmoose Farm. The Hadley family generously donated the Corn Crib to The Persistence Foundation in 2001. It was subsequently disassembled and transported to the Nipmoose Farm, where it was restored and resurrected.

Visit Before and During to learn more about the Corn Crib as it was before and after its extensive restoration. To see more photographs, visit the Historic Barns of Nipmoose Gallery. 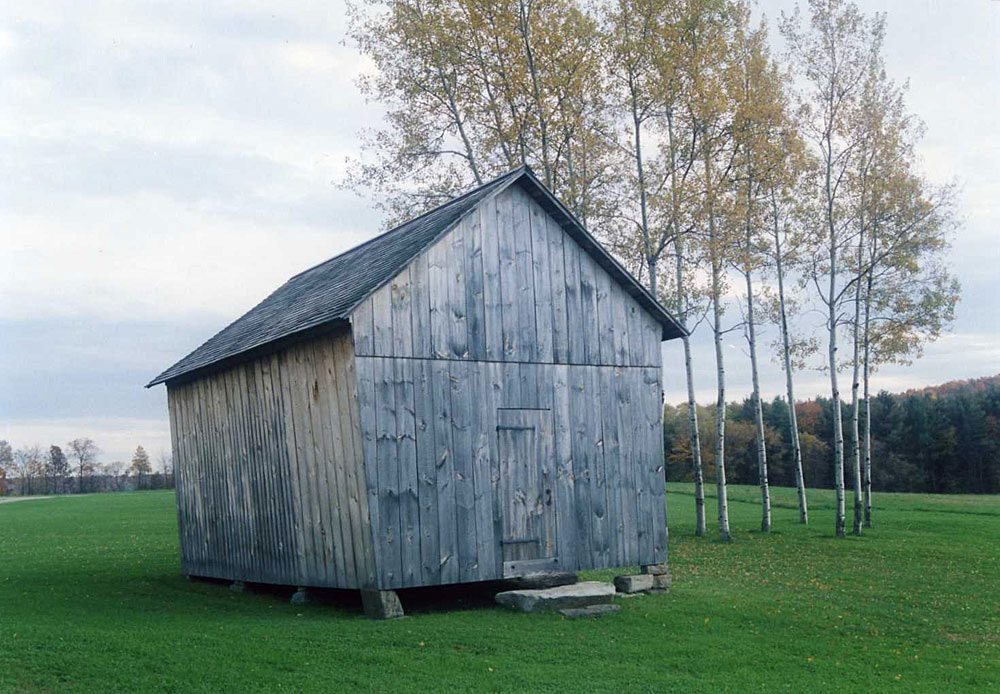 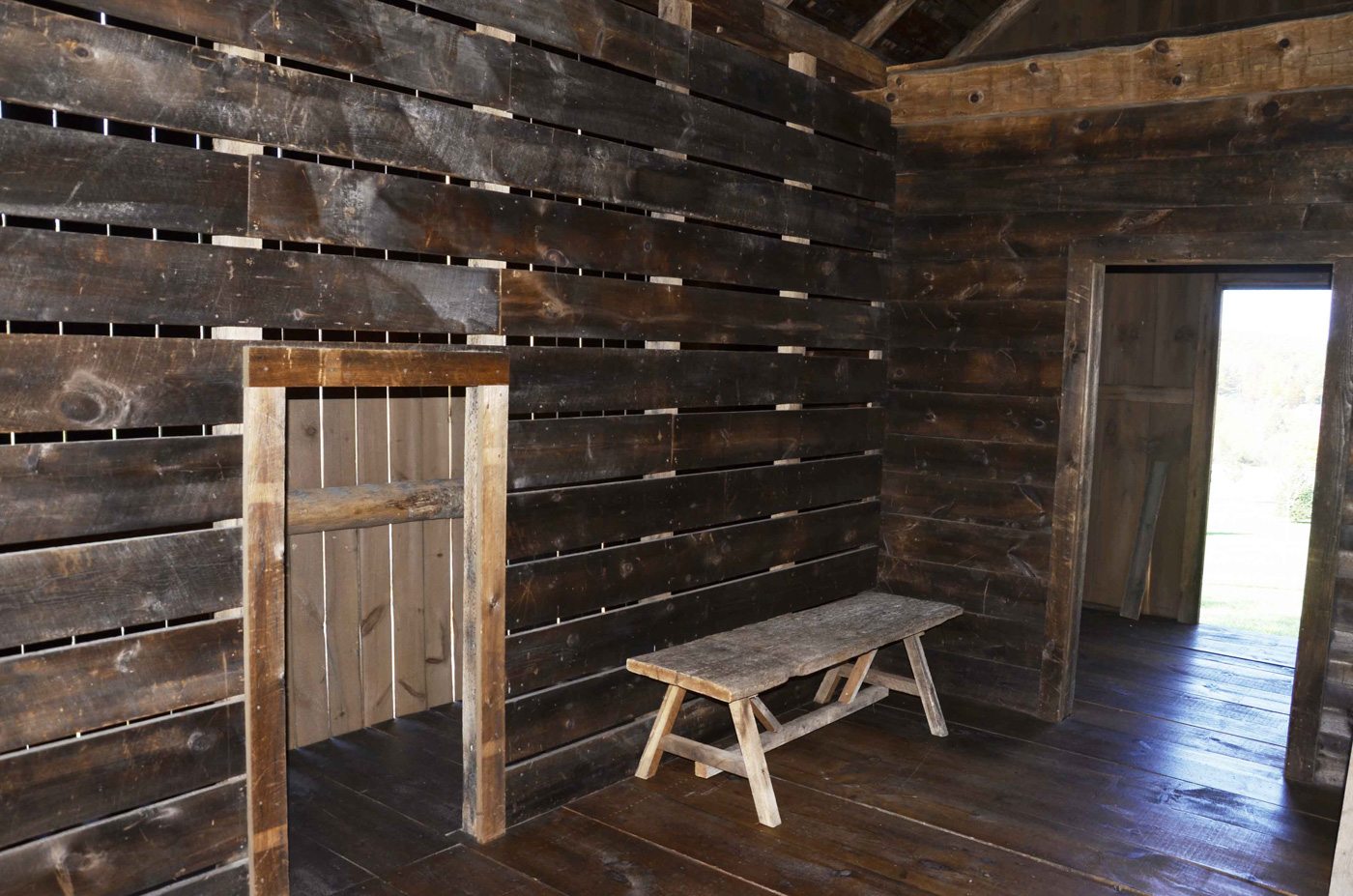 The Corn Crib sat forlornly in a wooded area, across the road from a farmhouse owned by the Hadley family in West Hoosick. No doubt, it was once surrounded by other barns and livestock. But none were visible by 2001.

In the interim, small trees were threatening to overwhelm the Corn Crib, and raccoons had settled inside.

Filled with abandoned furniture and tools, the Corn Crib was at first difficult to “read”. Only after it was emptied, was it apparent that the Corn Crib was remarkably intact, skillfully constructed and of historic significance. Adding to its beauty was the gorgeous patina of its pine and oak timbers.

The treatment of structural beams in the Corn Crib was varied. Typical of timber frame construction in the early 1800s, there were some hewn, some pole and some sawn beams. The posts and plate beams were hand hewn on all four sides, the girts and rafters were pole (hewn only on their back sides), and the short angled braces were sawn.

The interior corn crib partitions were the only structural beams missing in the Corn Crib. The mortise holes for them, however, clearly delineated where the beams had been located and how they had been framed.

Stone piers had once supported the Corn Crib, but they had long since collapsed. As a result, the Corn Crib’s sills and floor joists had sunk into the ground. As the barn was disassembled, the original floor system of mortise and tenoned timbers could clearly be seen decomposing in the dirt. Still visible though were square wooden pegs protruding from the floor joists. These had once secured wide plank boards to the floor beams.

The Corn Crib’s stance was slightly askew as a result of its compromised floor support. For this reason, its modest taper was difficult to discern from the outside. But clues confirming the taper were visible inside the barn. Pairs of wooden pins, securing the angled posts to the Corn Crib’s cross beams, were offset, one from the other. In most timber framed buildings, double pegs, which are used to join timbers together, are vertically aligned.

The roof system of the Corn Crib was complete, although suffering from rot in places. Pairs of pole rafters were neatly seated on the plate beams, with their rafter tails protruding to the exterior of the barn. At the peak of the roof, the rafters were half lapped and pinned together.

The Corn Crib had been slightly modified at some point for an alternate use. For example, two windows were installed, one on either side of the entry door. It is likely that the corn crib partitions were removed at the same time the other changes were made.

After disassembling the Corn Crib, The Persistence Foundation moved it to the Nipmoose Farm. 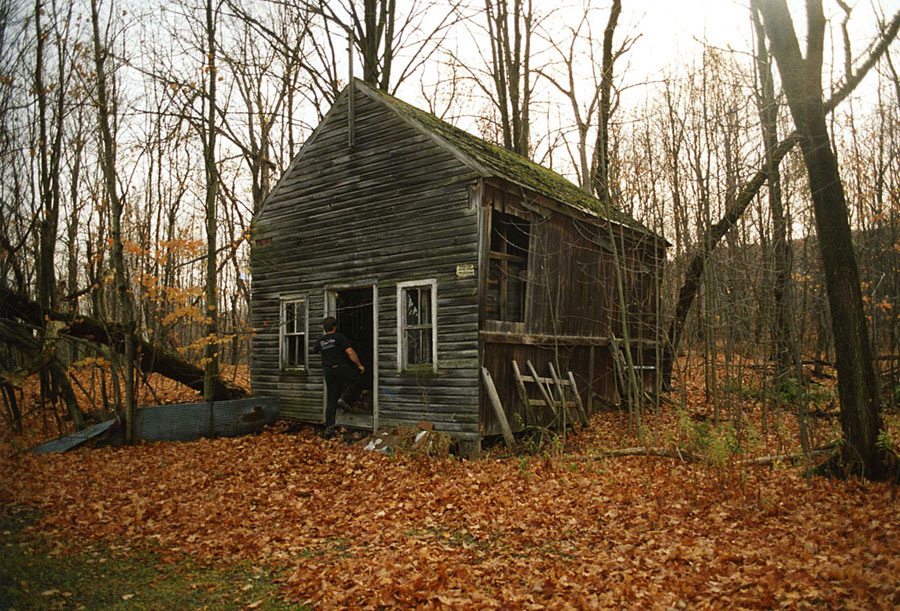 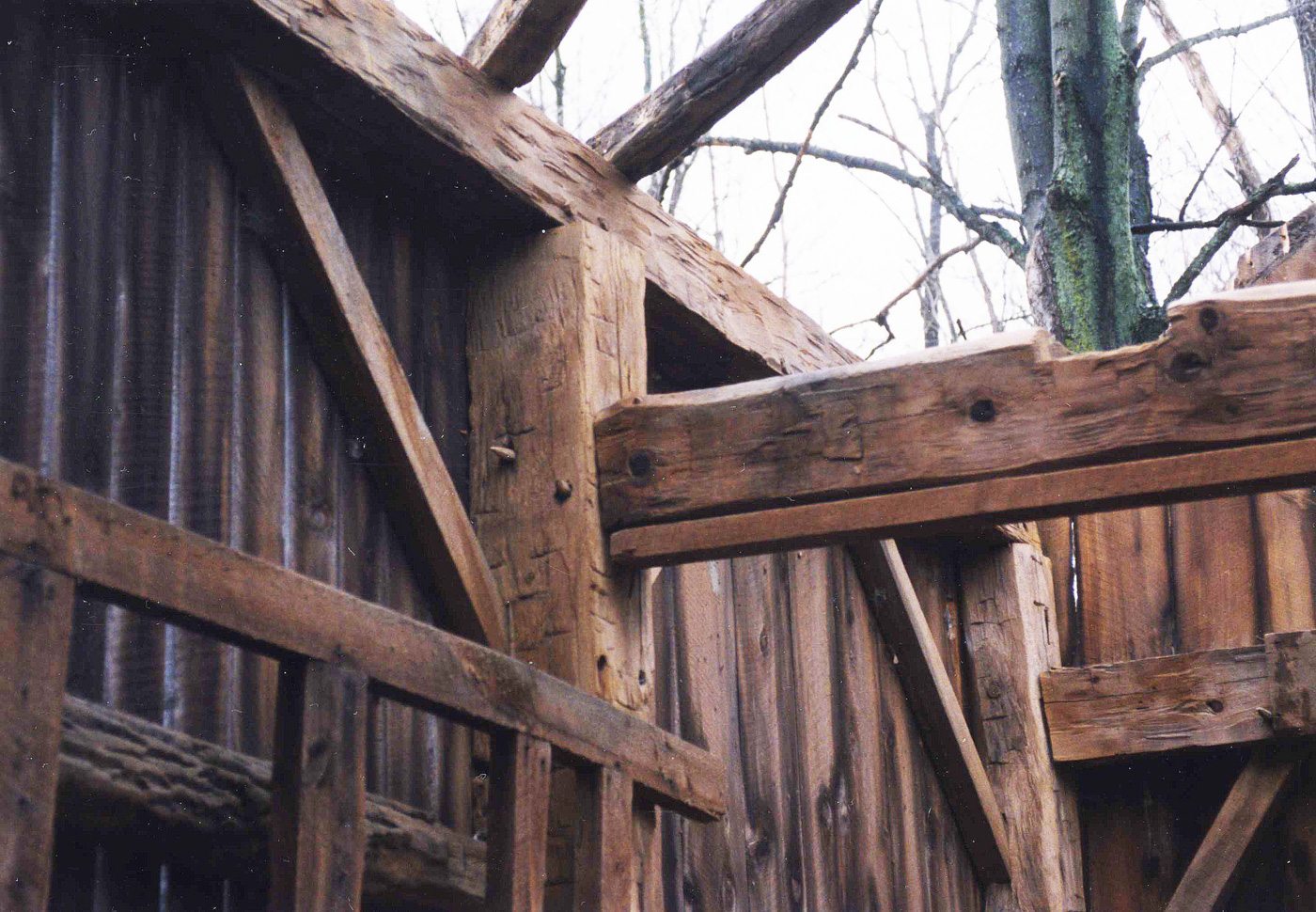 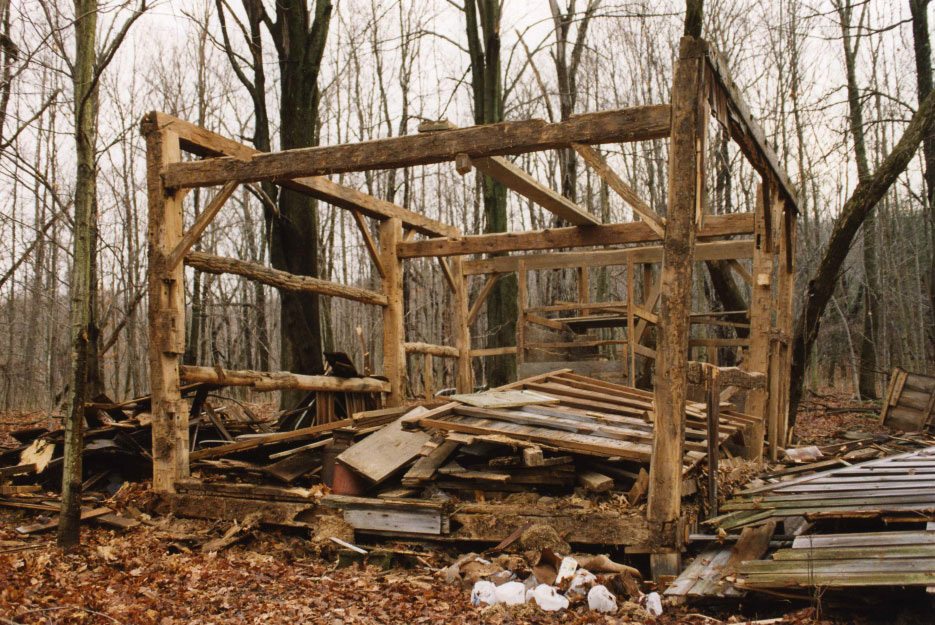 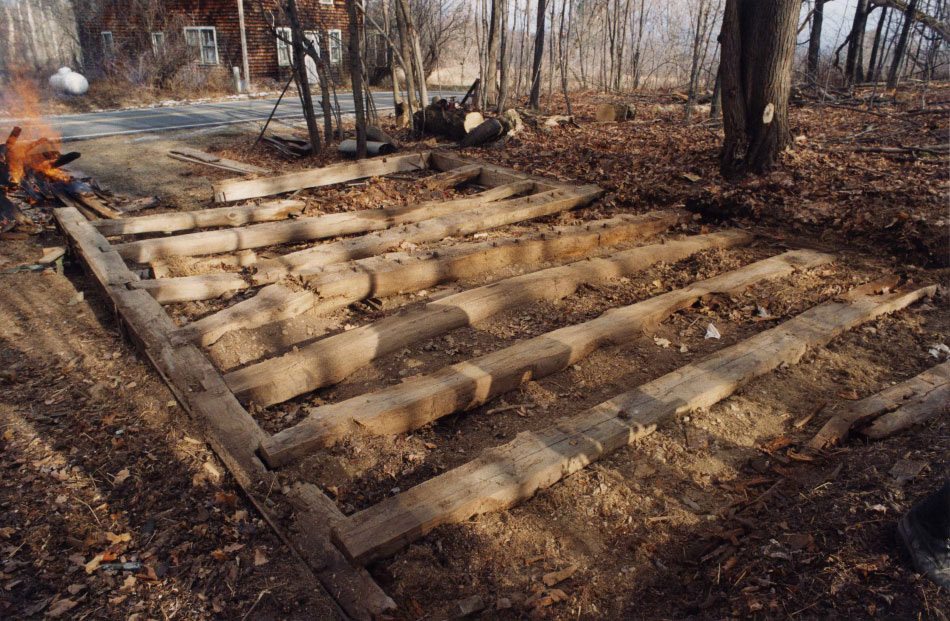 The restoration of the Corn Crib went swiftly and smoothly. Within just a few months, the Corn Crib was rejuvenated and proudly standing on its present site.

The relative speed of the Corn Crib’s transformation can be credited to its small size and the excellent condition of the majority of its structural beams.

Ron Babcock oversaw the disassembly of the Corn Crib, as well as its repair and subsequent raising.

The corn crib plate beams were the only timbers missing from the Corn Crib. Surprisingly, substitutes were found just yards away. A corn crib connected to the Nipmoose farmhouse was being disassembled, as it was deemed beyond repair. Its interior plate beams, however, were still intact and were promptly moved to the Corn Crib. With some modifications, they became ideal replacement beams.

Models for the restoration of the Corn Crib were found locally. The design of the corn cob partition walls, for example, was patterned after ones found in other historic corn cribs. Vertical studs were mortised into the corn crib plate beams and covered with horizontal siding boards spaced an inch apart.

The treatment of the exterior siding boards was another feature in which neighboring corn cribs served as templates. Wide pine boards were sawed up the center to within two feet of the top of each board. They were then nailed vertically on the sides of the Corn Crib, spaced slightly apart. As the boards dried, the sawed openings spread, thus providing air ventilation in the side rooms where the corn cobs were stored.

As the frame of the Corn Crib was re-assembled, each joint was secured with one or two round oak pegs. These pegs were made on a draw bench that replicated ones used in the past. Literally hundreds of pegs were produced on the draw bench, to fasten the joints of all three of the historic barns of Nipmoose.

In spite of its diminutive size, the Corn Crib boasts five door openings, all of which were newly constructed to match pre-existing ones. The doors include a front and back entry door, both of which swing on iron strap hinges, a sliding door that separates the grain room from the front bay, and two narrow door openings which access the corn crib partition rooms. 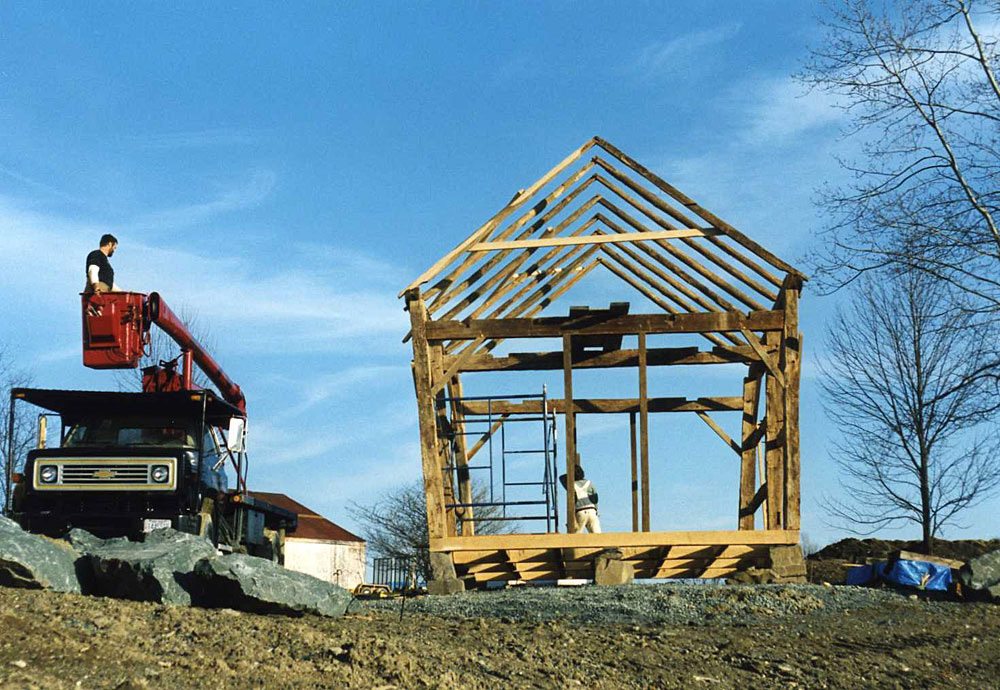 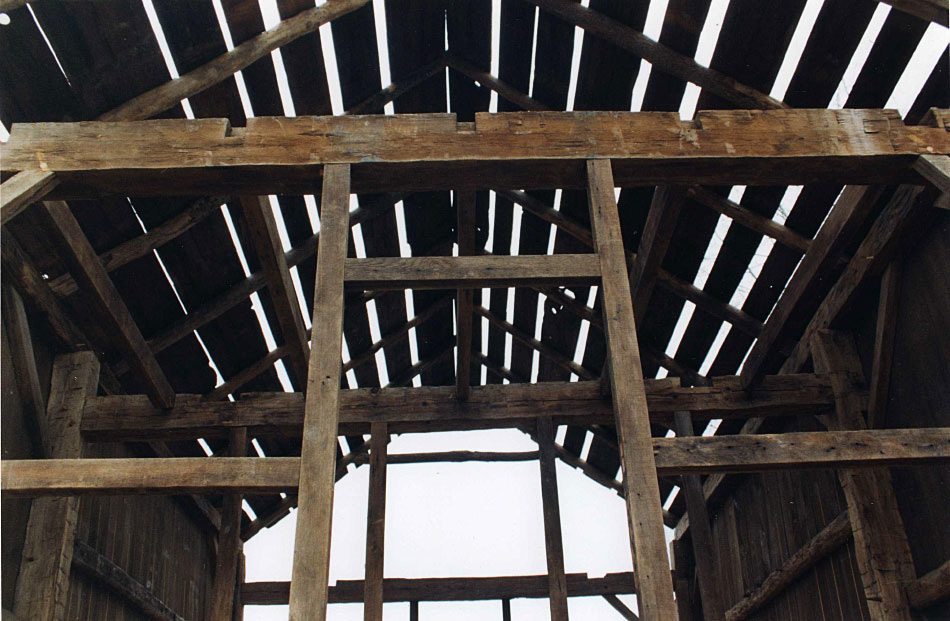 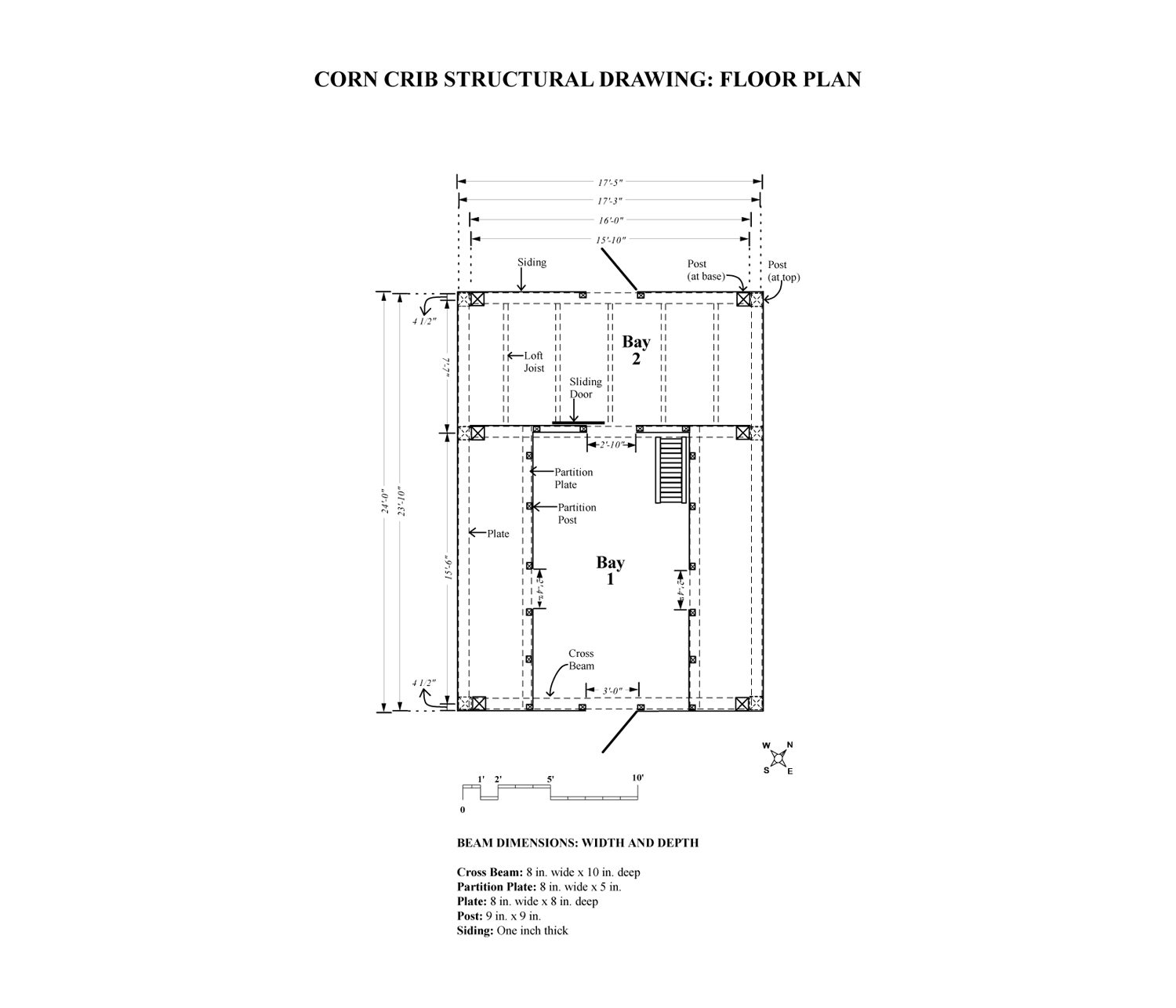