Like so many historic barns (including the Scottish Barn), the German Barn has been moved. Reputedly, it was brought to the Nipmoose Farm in the early 1900s. Its original site and size remain unknown.

Although the German Barn dates to the mid 1800s, its style of framing resonates with an earlier period of construction. One feature in particular stands out. It is the placement of double cross beams in each section. This design feature is believed to have been introduced in America by builders who emigrated from Germany. Cross beams are the timbers which cross the barn, connecting pairs of posts. Typically, barns have one cross beam for each pair of posts. In the German Barn, each pair of posts (there are five pairs in all) is connected by two beams, one set about four feet above the other.

Another special feature of German joinery is the way the upper cross beam is framed to the posts. Its tenons are dovetailed and locked into place with a wedge.

The German Barn was built in an era when sawmills were prevalent, but were limited in the length of the timbers they could saw. Thus, the 12 foot long posts of the German Barn were sawn, while its 30 feet long cross beams and 46 feet long plate beams were hand hewn.

The German Barn sits on a bank and has a full basement that has been designed for contemporary uses, such as the catering of events. Many barns in the mid to late 1800s were either built on banks or moved to banks to accommodate increased numbers of dairy cows, which were stabled in the lower level.

The monumental stone wall on the west side of the German Barn is a dazzling example of a dry laid stone foundation. Boulder-sized stones are skillfully suspended within the wall, which flanks a double door accessing the lower level.

The German Barn includes two loft areas, one on each end of the barn and a handsome oak plank floor. Three sets of double sliding doors, in addition to an entry door, allow for great flexibility in the use of the barn.

In order to hold events, meetings and exhibits in the German Barn, it has been insulated, and the interior walls covered with wood siding. 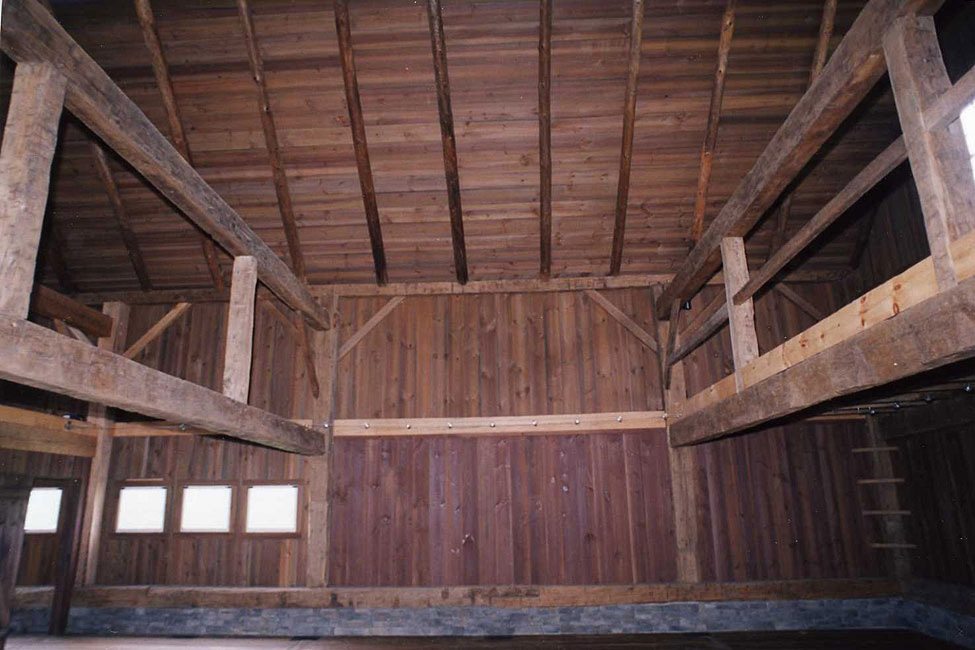 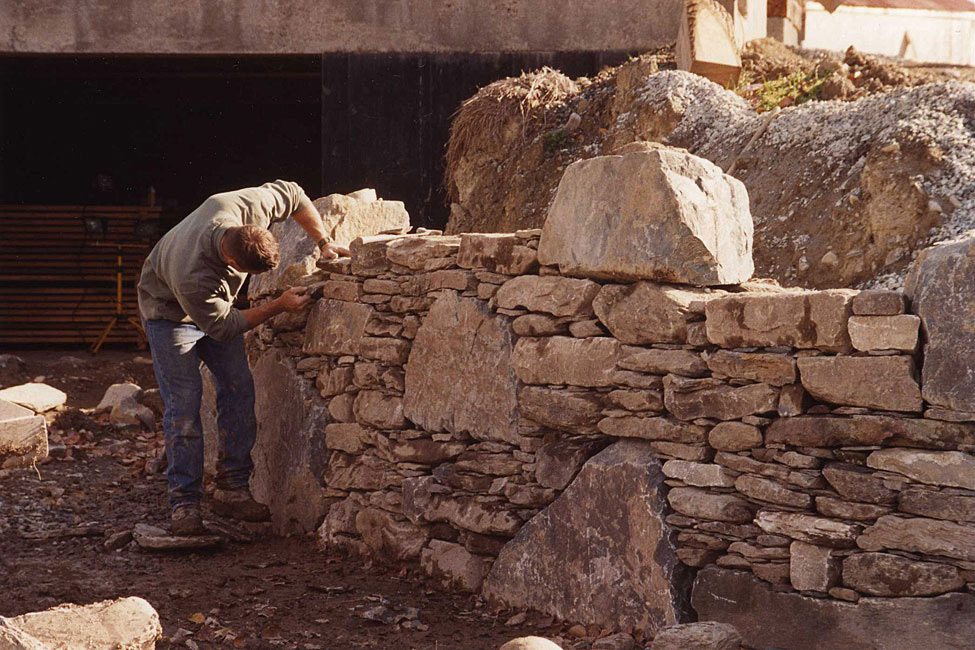 The German Barn’s appearance was stolid, but worn, when first purchased by The Persistence Foundation in 2000. Gaping holes in the siding had subjected some of its major beams to rot, and its concrete foundation walls were fatally cracked.

Still, the German Barn’s enormous red oak timbers seemed more than sufficient to forestall assaults from the elements and neglect.

The sturdiness of the German Barn was perhaps its most prominent characteristic. The source of its strength derived from a double set of cross beams in each of its five sections. The long tenons of its cross beams were mortised into the side wall posts and secured with pairs of wooden pins.

The German Barn’s muscular appearance most likely recommended it for adaptive re-use. Circa 1900, it was moved to the Nipmoose Farm. For unknown reasons (perhaps to address conditions of rot), the barn was reconfigured. This was evidenced by the original Roman numeral markings, which were out of order. The markings also indicated that the barn had originally been considerably larger, when first built.

Prior to its move, the German Barn appears to have been designed for multiple tasks. For example, a line of holes in one of its cross beams suggested that hay racks had been installed for horses. No doubt, a small number of cows were also housed in the barn. But the bulk of its space had surely been devoted to the storage of loose hay.

Once situated on the Nipmoose Farm, the German Barn became the hub of a dairy operation. Trappings of a modern dairy barn were subsequently installed. These included concrete gutters for the removal of manure, stanchions for the cows, and an abundance of windows and doors for light and ventilation. The German Barn’s efficiency was further enhanced by easy access to a concrete block silo positioned nearby.

A full loft had been installed in the German Barn, after it was moved. Accessed principally by hay doors on the barn’s gable ends, the loft visually separated the upper cross beams from the lower ones. The loft provided space for the storage of hay bales and also retained heat below, where the dairy herd was stabled. The lower cross beams of the German Barn supported the loft, but the upper cross beams stood awkwardly as obstacles in the navigation of the loft area.

Recycled thatch poles were an intriguing find in the German Barn. They were used as supports for the loft’s floor joists. It has been conjectured that the thatch poles were salvaged from the Scottish Barn. But this cannot be confirmed. 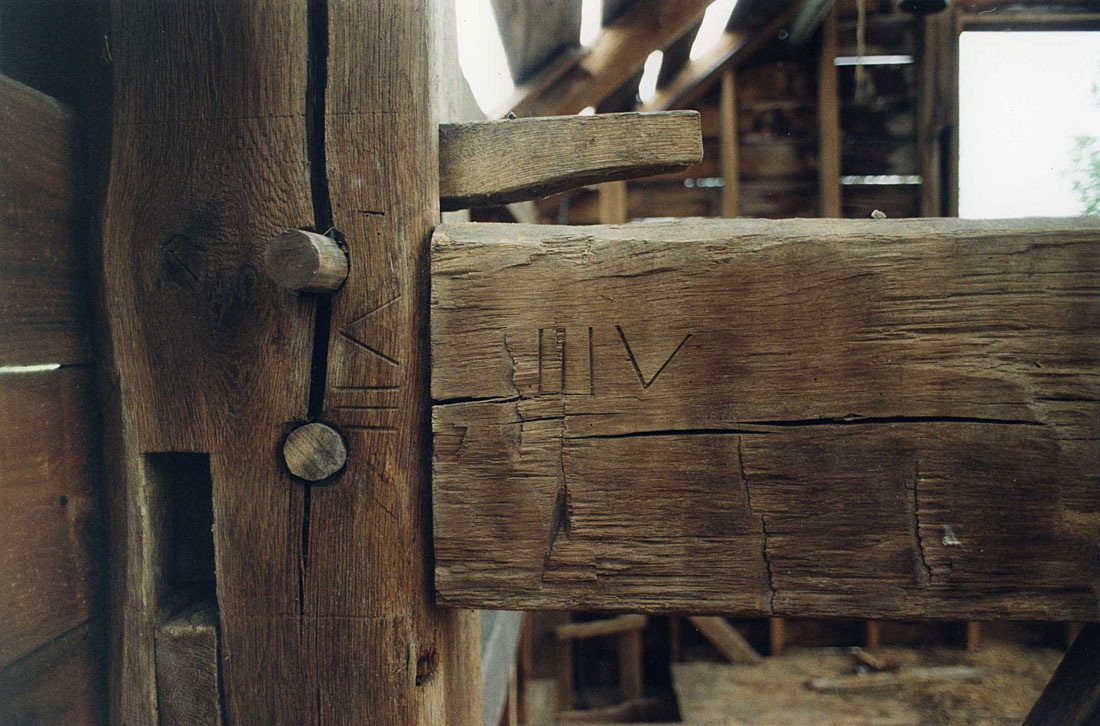 There were two primary goals in the restoration of the German Barn. The first was to recapture its original luster. The second object was to transform it into a meeting house. A combination of new and old building technologies was required to achieve these goals.

Ronald Babcock started work on the German Barn in 2001, continuing on and off until its completion several years later. With the help of several assistants, he shuttled back and forth between historic and contemporary building techniques.

Because of its poor condition, the German Barn was disassembled in its entirety. Reparation of the beams was accomplished inside the Workshop Barn at the Nipmoose Farm. While the majority of the German Barn’s original structural beams were able to be re-used, several rotted beams were replaced with red oak timbers harvested from neighboring woods.

The buzz of heavy equipment was a constant in the restoration of the German Barn. A bulldozer excavated the cellar, a backhoe dug ditches for drainage and electrical lines, and a skid steer transported the dense oak beams to and from the workshop, as well as positioning the boulder-sized rocks in the stone wall. A lift was used to access the high side walls, and a bucket truck helped workers scale the roof top.

Some rearranging of the beams took place to showcase the German Barn’s fabulous double cross beam structure. The new beams were hidden by partial lofts constructed on each gable end of the barn, while the picturesque historic timbers were positioned in the open central bays.

Fortunately the entire roof system was intact, and the pole rafters could be reseated on the original plate beams.

An enormous double door for hay wagons was constructed at the entry level, as well as two sets of smaller double doors. All these sliding doors were capped with pentice roofs, a traditional feature found in many historic barns, to deflect rain from door entrances.

It is not known whether or not the German Barn was originally a bank barn. It has been situated on level ground, when first moved to the Nipmoose Farm. But when reconstructed, it was built on a slope. Its tranformation into a bank barn provided additional space, as a lower level was created. Bank barns were a common feature of mid 19th century barns, when farmers needed more room for increased sizes of dairy herds.

Clayton Babock undertook the construction of the German Barn’s extraordinary curved, dry laid stone foundation. Skillfully, he stacked each stone, without aid of any mortar or concrete. The wall, which is located on the west side of the barn, measures an astonishing twelve feet high, where it meets the German Barn’s lower level walls.

Electricity, insulation and heating were all included in the restoration of the German Barn, as well as track lighting, wood paneled interior walls, an oak plank floor and a finished basement. 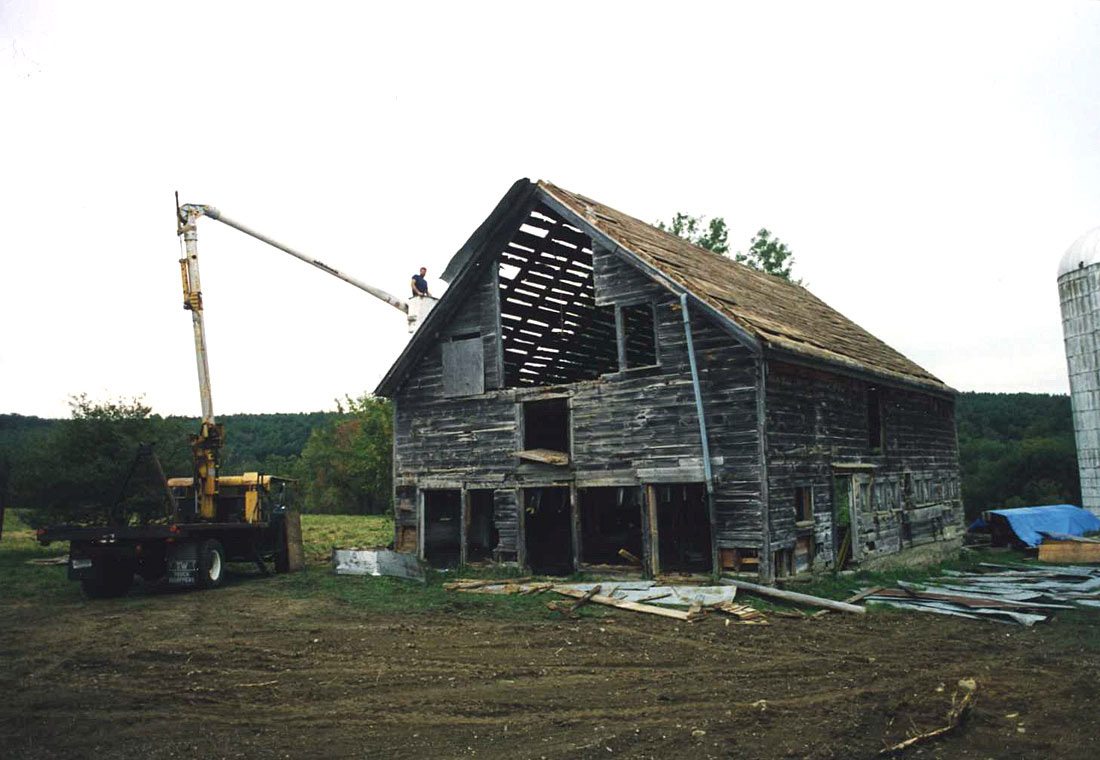 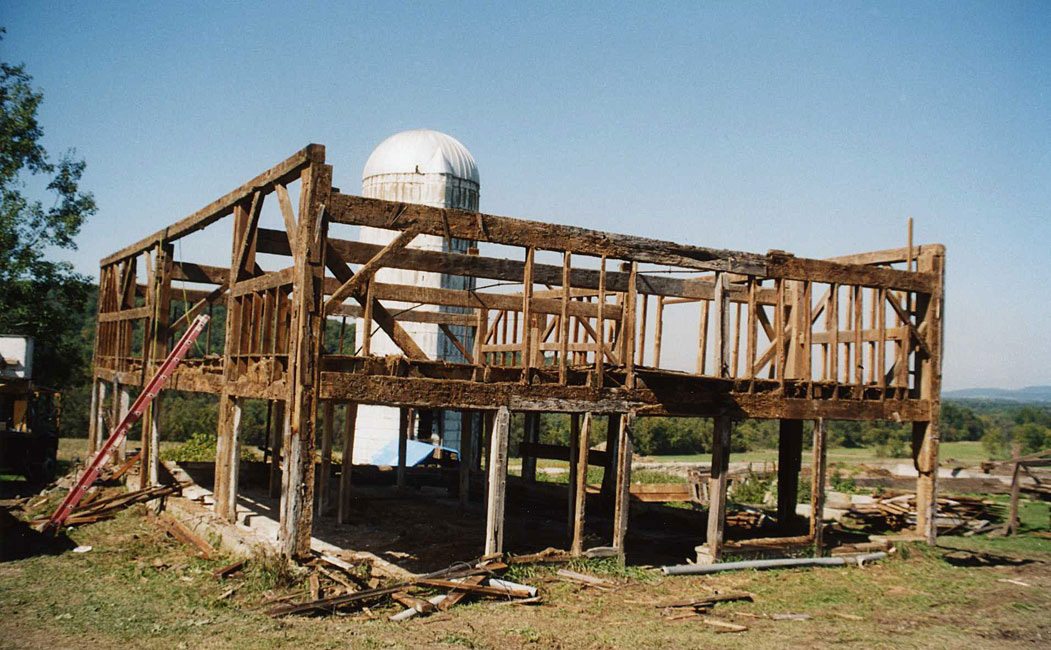 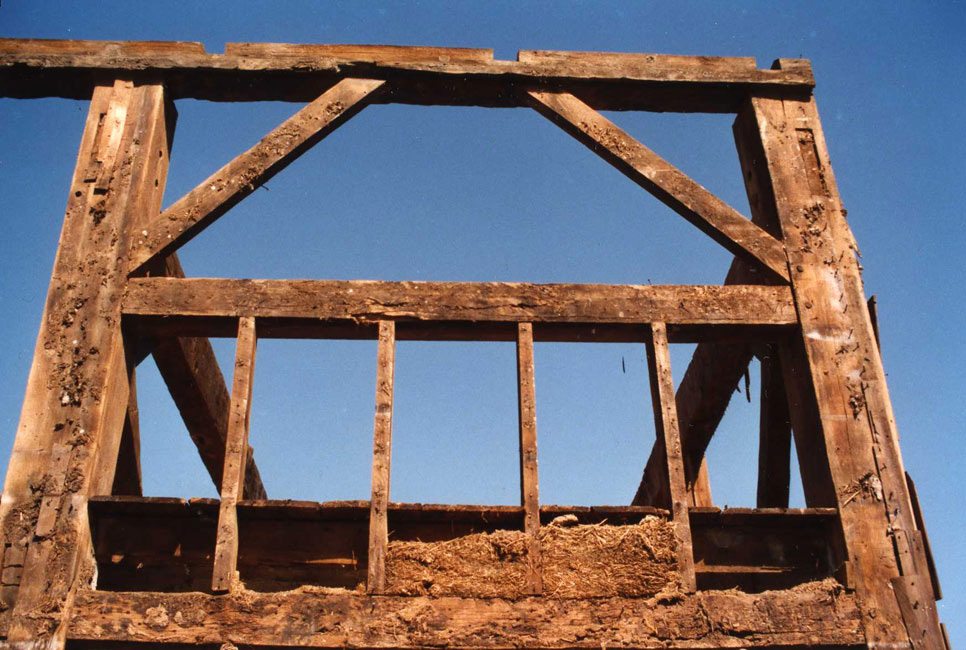 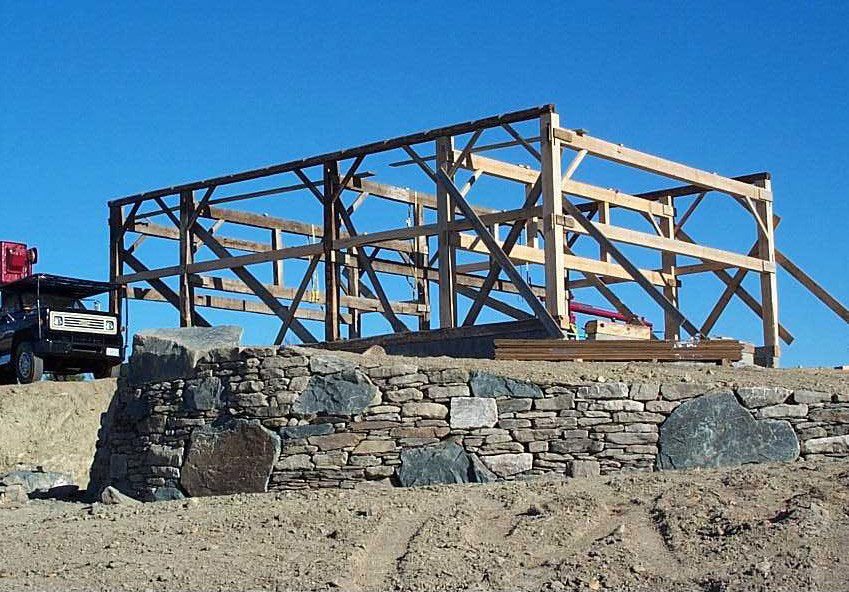 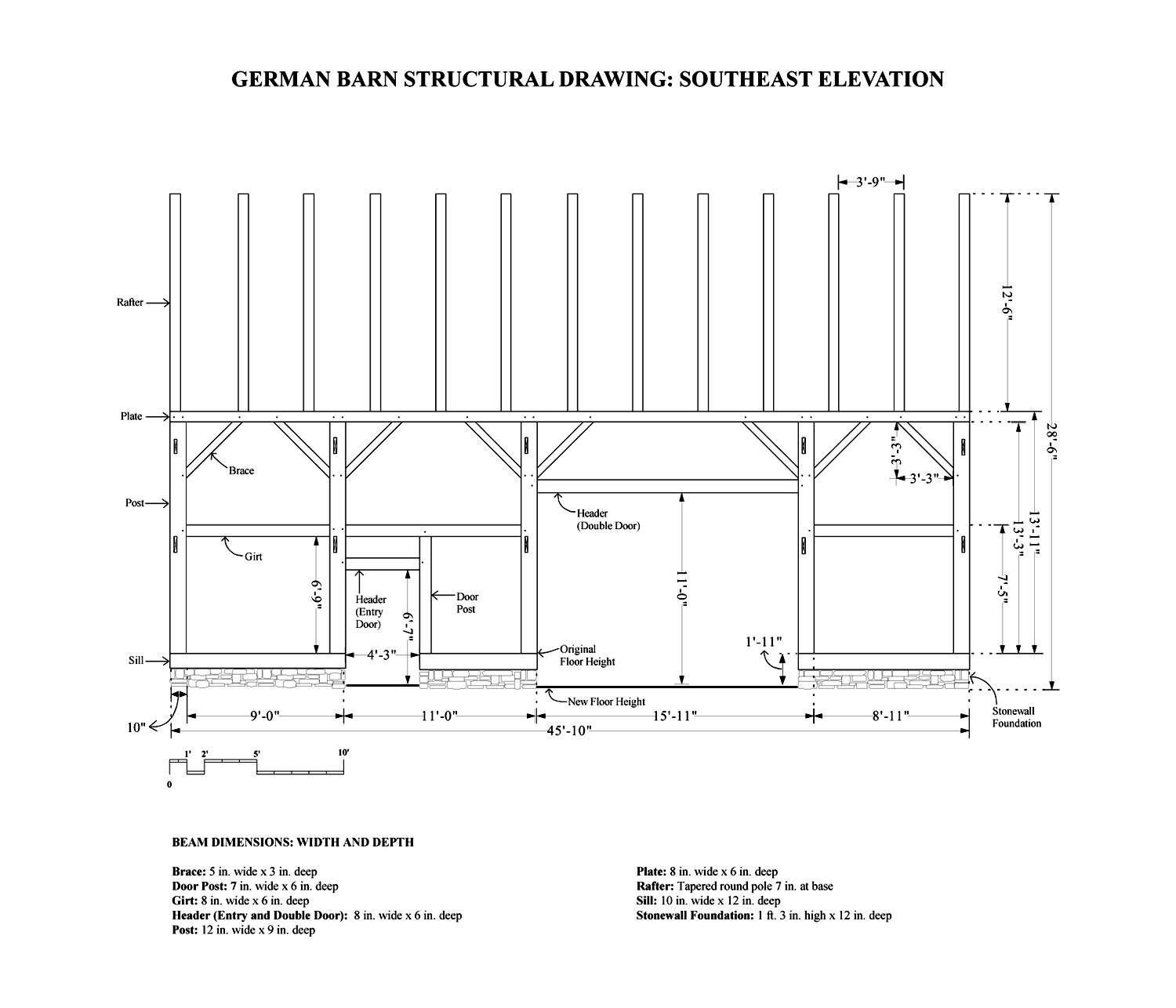 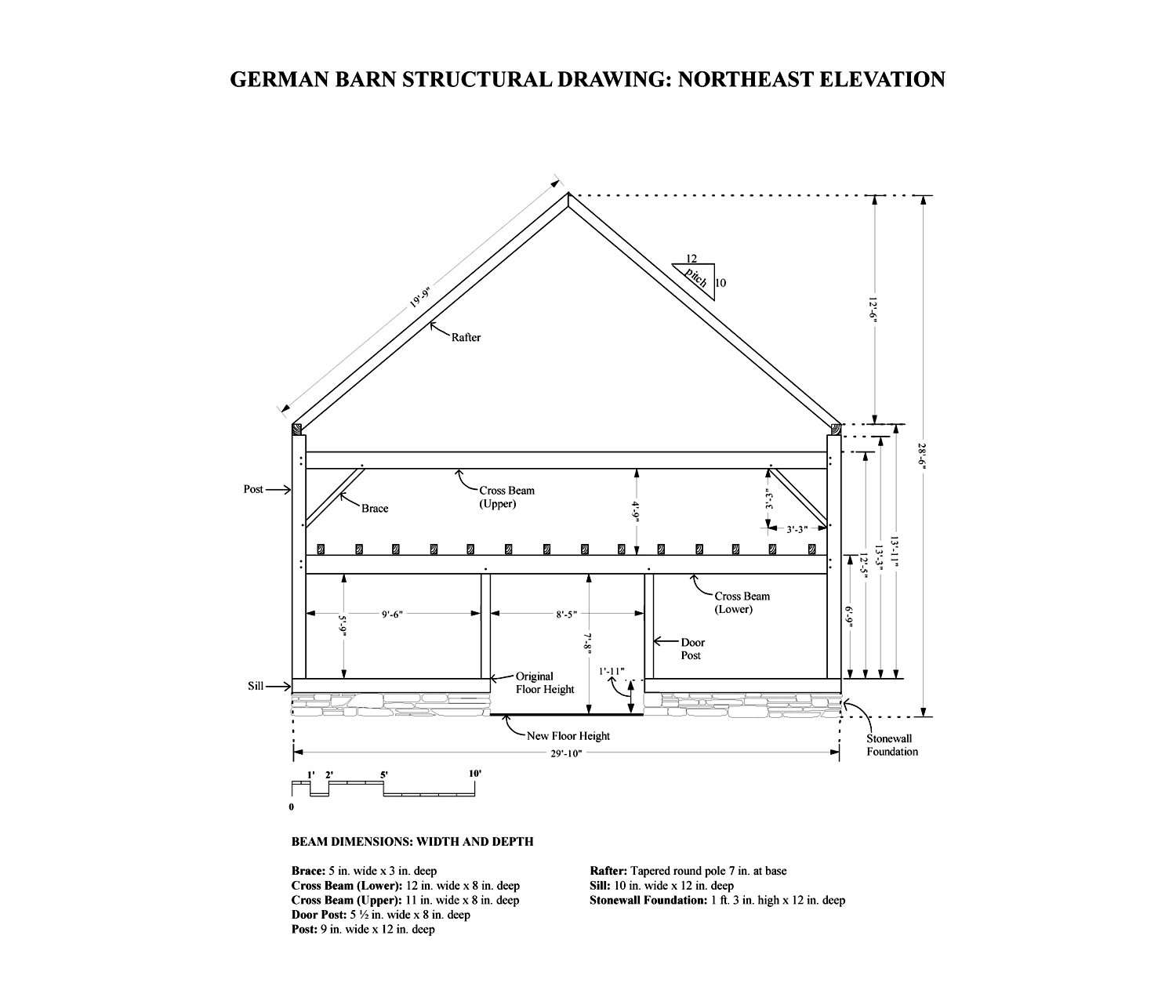